The Bumbleride Speed is a nice looking jogging style stroller with enough features to be a potential primary stroller as well. We like the unique two angle locking option for the front wheel and the more substantial rubber tires that make pushing and turning the stroller a breeze. This stroller has adequate storage, a giant canopy, and an adjustable handlebar. Unfortunately, it is heavier and more expensive than much of the competition, and it isn’t as easy to use. Pulling double duty could make the higher price seem like a bargain, but there are several joggers that cost less with better performance. All of this makes the Speed an interesting choice and one to watch going forward, but currently, it pales in comparison to the competition.

Update – October 2018
Bumbleride has updated their Speed stroller in 2018. New changes do not change the overall functionality of the stroller but offer some improvements over the last model. See below to read more about the changes. We are now linking to the new version in this review.

Our Analysis and Test Results

The new Bumbleride Speed has had a number of changes made to improve its usability and eco-friendliness. The new canopy is 1.5 inches taller to accommodate growing toddlers and the canvas fabric is now treated with a more eco-conscious water repellent that breaks down faster in the environment and has less potential toxicity. The fold trigger has also been modified to make it more ergonomic. These new changes come with a price tag that is $20 higher and a brand new selection of colors and seat liners. The 2017 version of the Bumbleride is shown below left next to the 2018 Bumbleride (right).

The Bumbleride Speed is a step up from previous Bumbleride options with unique features and impressive maneuverability.

In 2004, Bumbleride was started by Matt and Emily Reichardt. Inspired by the birth of their first baby, this San Diego based family decided to create gear for families with active lifestyles. This company is committed to safe products using OEKO-TEX Standard 100, Class I textiles and the environment with 100% recycled polyester made from post-consumer water bottles. Bumbleride is partnered with a family-based manufacturer in Taiwan.

The Bumbleride Speed (in blue) is an improved offering from Bumbleride that placed higher in this review than any previous Bumbleride.

Details on the Speed’s performance are outlined below by metric.

The Speed’s storage bin is only accessible from the back and has mesh sides that leave contents open to potential dirt and water.

The Bumbleride is easy enough to use, but only performed about average compared to the competition for ease of use with a 6 of 10.

The Speed is easy to fold using two hands with an automatic lock and self-stand. Once the belly bar is down, there are only two steps to folding the Speed but the self-stand requires the handlebar to be the right height or it won’t work.

The longer brake pedal on the Speed makes it easy to set but it isn’t as foot-friendly on open-toed shoes as we’d like.

The brakes are single action and wholly average. The design is not sandal foot friendly but workable if need be.

The Speed’s basket has a 10 lbs maximum limit and with some wiggling, we were able to fit our large diaper bag inside.

The storage bin has a maximum weight capacity of 10 lbs and fits our large diaper bag. It only has access from the back, but the space is wide open and easy to use if the seat back isn’t reclined. The Speed has two mesh pocket on the seat back, a zippered pocket on the canopy back, and one passenger stow pocket inside.

The Speed has a large canopy with a nice peek-a-boo window that is easy to see through.

The Speed has a large canopy with a nice peek-a-boo window. The window is mesh but has a cover with magnet closure. A panel of the shade zips off for more ventilation on hotter days.

The Speed buckle requires putting in each of the four straps separately which makes for a convoluted buckling process.

The harness on the Bumbleride is 5-point and easier to put on and take off than adjust. Adjustment needs to be done for each strap individually, and the buckle has a button on the back you need to press simultaneously with the front to open. Neither feature is hard, just more involved than much of the competition.

The plastic toggle on the Speed is easy to squeeze and operate with one hand.

The Bumbleride seat reclines almost flat for comfortable napping and the canopy opens wide enough to offer a dim place to sleep out of the spotlight. The plastic toggle for recline is easy to use with infinite settings.

We tested the Speed with the Chicco Keyfit 30 infant car seat and Chicco adapter.

The Bumbleride can accept some infant car seat carriers with the purchase of adapters including:

We tested our Speed using the adapter for the Chicco Keyfit 30. The adapter has two screws to attach it to the frame, and you need to remove the canopy of the stroller to connect the car seat to the adapter. The seat is about average to install and remove, and it requires the second strap attachment we don’t like. You can install this incorrectly if you skip the straps and we worry parents will as if feels somewhat stable without them. 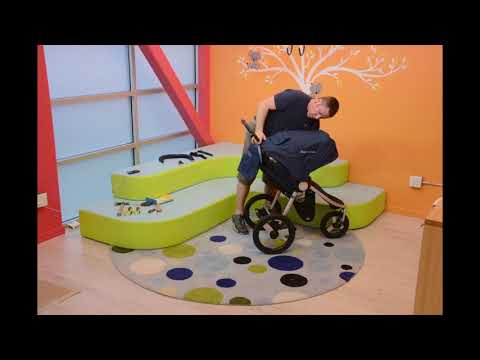 The Speed took us a little over 13 minutes to set up earning it a 4 of 10 in this metric. Despite the longer set up time, the manual is nice and you can assemble the stroller using mostly photos. Some of the competition took closer to 5 minutes, making them better choices if an assembly isn’t your thing.

The Speed is a nice mover with a score of 8 of 10 for maneuverability. The Speed has a locking swivel front wheel with two locking locations with is unique. The swivel and shorter footprint help it navigate smaller spaces with tighter turns. This stroller also performs relatively well on rougher terrain thanks to larger rubber tires and the three-wheel design.

The Bumbleride has suspension on all three wheels and an adjustable handlebar with a rubber cover. The seat is a sling style with adequate padding for a comfy ride for passengers and pushers.

The Speed is comparatively heavier and larger than some of the competition earning on 6 of 10 for weight and folded size. It weighs 26.6 lbs and measures 13,283 cubic inches when folded. Only five of the competing options are heavier than this stroller which means there are lighter strollers available. It is also larger than average, though it doesn’t come close to the largest stroller that is over 17,000 cubic inches.

With a deep recline and large canopy, the Speed seating area makes a cozy napping space.

Bumbleride price indicates a higher level of quality, and the Speed earned 7 of 10 in this metric. While seven may not seem high, only three strollers performed better in this metric. The materials are nice, the frame is sturdy, and they all come together in a nice design with limited flex and pleasing looks. The fabric is a little rough, and the joints are plastic, but overall this stroller puts forth a good effort.